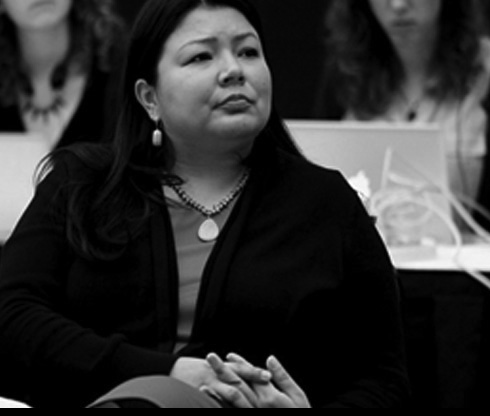 Janice Makokis is a nehiyaw iskwew (Cree woman) and mother to son Atayoh Kan Asiniy
(Spirit Rock) Makokis from Onihcikiskwapiwin (Saddle Lake Cree Nation) of Treaty No. 6
Territory in what is now called Alberta (Canada). She is a daughter, niece and granddaughter to
residential school survivors and works daily to address the international impacts of inter-
generational trauma from residential schools, in how she raises her son. She is an indigenous
legal scholar, an advisor, indigenous researcher and an educator. Currently, Janice works for a
First Nation as an advisor working on a variety of files that relate to nation building, Cree law-
development and self-determination. She was appointed the Ianni Legal Scholar in 2021, at
Windsor Law School, where she teaches courses on First Nation Women and the Law and
Indigenous Laws and Legal Orders. She has worked with various Indigenous Nations in the area
of Treaty advocacy and protection, the development and implementation of Indigenous laws and
land based Indigenous education and governance initiatives. She is also a co-producer of a new
film entitled “Awasisak Our Future” which tells the story of a group of treaty walkers who
embark on a learning journey and have conversations about the importance of Treaties, the treaty
relationship, treaty obligations and the work required for Indigenous and non-Indigenous people
to work together for the betterment of future generations. Janice also serves as a board advisor
for the Yellowhead Institute (Toronto Metropolitan University), an Indigenous led research and
education centre.
She has worked for Federal and Provincial Governments and First Nations in the area of law,
policy, governance and First Nations issues. She has been an advisor to tribal councils and First
Nations advising on matters that impact upon First Nations rights and jurisdiction. Her greatest
learning came in working with residential school survivors in the independent assessment
process (IAP), as part of the residential school settlement agreement. She is also a sessional
Faculty at the University of Alberta in the Faculty of Extension’s Indigenous programs, the
University nuhelot’įne thaiyots’į nistameyimâkanak Blue Quills (a former residential school),
and Yellowhead Tribal College’s Indigenous Governance program. She is part of a University
of Alberta SSHRC Research project called “Just Powers” which is an inter-disciplinary and
community-engaged network of research projects focused on climate justice issues. She
frequently does presentations to law schools, universities, businesses, companies and many
organizations about indigenous Treaties, indigenous advocacy, Indigenous nationhood,
reconciliation and Indigenous politics and self-determination. She holds a B.A. in Native Studies
(minor Political Science) from the University of Alberta, an M.A. in Indigenous Governance
from the University of Victoria and an L.L.B (Bachelor’s of Law Degree) from the University of
Ottawa.
She has been involved with International Indigenous advocacy work through various
International bodies and United Nations mechanisms to advance the discourse on Indigenous
People’s rights. She served as the co-chair/ co-coordinator on the North American Indigenous

Peoples Caucus (NAIPC) from 2013-2016, a voluntary Indigenous body that makes
recommendations to the agenda items that are addressed by the United Nations Permanent
Forum on Indigenous Issues. She has been a rapporteur at international meetings with her
involvement in the NAIPC. Janice has spent the past 20 years learning about nehiyaw (Cree)
ways of being and laws from Elders and Indigenous knowledge keepers. She participates in
activities/ education initiatives that help advance the struggles of self-determination; Indigenous
governance and the recognition of Indigenous Treaties in Turtle Island (now called North
America). She is passionate about decolonization initiatives and cultural resurgence and
revitalization efforts.